KSCP JSC is situated in the southeast part of the Baltic Sea in Pregel river watermouth.

Terminals of  KSCP JSC are located in inner harbours (Volnaya and Industrialnaya) of the Kaliningrad city and connected with the Baltic sea by navigation canal 43 kilometers long, from 80 to 150 meters wide and from 9 to 10,5 meters deep.

KSCP JSC is located on the junction of the major thans-european transportation corridiors branches (I, IX) in Special Economic Zone of the Russian Federation – the Kaliningrad region, separated from the rest territory of Russia by land borders of  Euro members (Poland and Lithuania) and international sea waters.

KSCP JSC is notable for favourable natural conditions, since the Kaliningrad port is a unique ice-free Russian port on the Baltic Sea.
The port of Kaliningrad has advantageous geographical location and the shortest sea distances to the major west-european ports relatively to other Baltic ports. 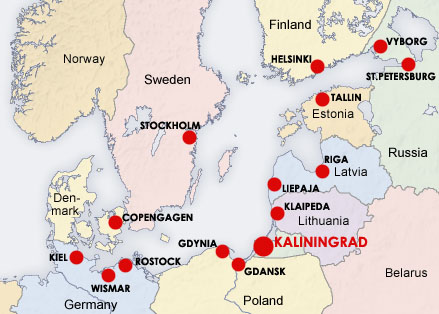 Table of distances to the major European ports (in nautical miles):

Berths of  KSCP JSC are connected by rail- and motorways directly with the whole transport routes network of Russia and other countries, while shipping lines are connected with ports of Germany, Denmark, Netherlands, Belgium, and Great Britain. It should also be noted that the Kaliningrad region has three connecting points of European and Russian railroad track.